During the summer if you ventured down to Ironbridge or to the busy surroundings of the Southwater complex in Telford you may have noticed a number of colourfully painted giant ducks.

Sat on top of large plinths the ducks were the brain child of local resident Julie Ward who was inspired by a Norwich gorilla trail she heard about in 2013.

The ducks have attracted large crowds to both areas with people keen to have their photo taken with the artistic creations, as the town celebrates its 50th anniversary.

Once the summer was over the plan was to find the ducks new homes by auctioning them off, with the proceeds split between the Severn Hospice and the Jayne Sargent Foundation.

At Pensionlite we like to stand out from the crowd, do things a little differently and when we heard there was a duck auction we wanted to be part of it.

Finance director Mike Shaw said: “We really wanted to help support these two great charities and what better way to do it than bidding for one of these amazing ducks.”

After some frantic bidding we managed to win one of the ducks and it now takes pride of place in our office reception area.

Finance director Lorna Evans said: “The auction was tense and we had decided before the auction that the C-Ellie-brate duck was our favourite – we have a lot to celebrate at Pensionlite, much to be grateful for, plus it has glittery paint on it and a cupcake – you know how we feel about food here!

“We took a risk though; it was the 8th lot out of the 10 ducks so there was a risk that if the price went too high we might not get a duck at all.

“Mike is the most level headed so we nominated him to be chief bidder and he really maintained his cool, as the bidding went higher, the competition kept coming and the auctioneer lead a round of applause for the value it reached.

“When the auctioneer started his, ‘going once, going twice’ I don’t think any of us breathed until he clapped – “SOLD!” We met the designer, Ellie, plus her mother and grandmother; they’re all very proud, and rightfully so.”

As well as winning the giant duck the team at Pensionlite bid on the miniature version of Ellie’s design and gave it to her to take home.

Our new recruite will bring plenty of smiles in the office and with the vibrant colours it is going to make the perfect welcome for all those people who come in to see us. 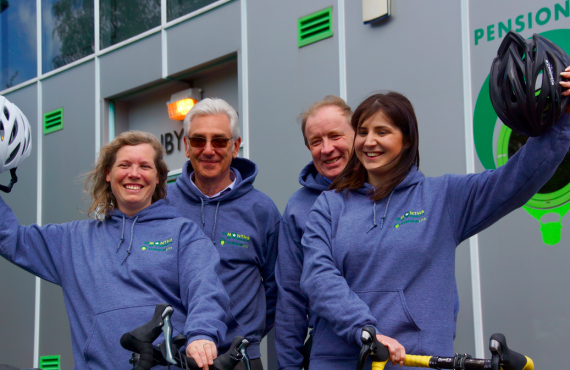 An amazing year so far

We’ve added to our experienced team

Our charity rowathon gets closer

Double bill at the Pensionlite office

Get in touch now